Jonathon features in the Otago Daily Times:
http://www.odt.co.nz/entertainment/arts/164948/renaissance-man-relishes-dunedin
Posted by Alistair Mackay at 6/19/2011 08:38:00 PM No comments:

Download a copy of "The Town Cryer" with news about Medieval and Renaissance Events and Groups in Dunedin from:
http://dunedinblog.co.nz/docs/TownCryerWinter2011.pdf (670kb)
Posted by Alistair Mackay at 6/19/2011 08:23:00 PM No comments: 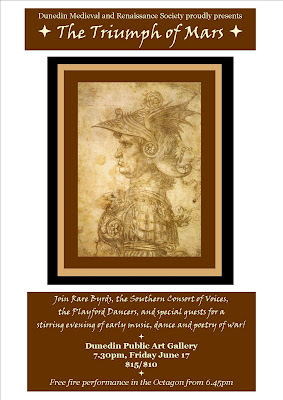 Playford Dance Practices are held at 5 pm on the first and third Sundays of the month.
Downstairs at the Carnegie Centre, 110 Moray Place.
Come with a partner or on your own.
Phone Jonathon 4531947 for more information.

Music and directions for the English Country Dances that we practice, can be found here.
Doing a search on Goggle, or YouTube, can also find useful material.
Dancers on on YouTube may do the dances slightly differently than us, but the videos do give the general idea.

The Past
The Dunedin Medieval and Renaissance Society was formed in early 1209 – sorry,
that’s 2009 -by a group of early music and dance enthusiasts who wanted to explore the
rich cultural resources of the medieval and renaissance periods in a fun, inclusive and
community-oriented way.

The Present
The Society has quickly evolved a number of active interest groups, including the Rare Byrds
early music ensemble, the Playford Dancers (a seventeenth-century dance group), and a
renaissance rapier fencing school. Our current membership is around 30 regular participants
plus a rapidly-growing list of people interested in specific events.
Each year in June, the Society hosts medieval midwinter festivities with a concert of early
music and a programme of talks and demonstrations. This year the theme was Choreomania
(“dance madness”) and the concert featured medieval, renaissance and baroque dance
music performed on period instruments such as recorder, viol, spinet, harpsichord, and an
amazing Swedish string instrument called the nyckelharpa. Our concert is always followed
by complimentary biscuits and the one medieval culinary item most essential to a Dunedin
winter: mulled wine. The associated programme at the Dunedin Public Art Gallery included
dance classes, a puppet show of Jonah and the Whale, and guest speaker Sandra Clair, who
gave a fascinating presentation on renaissance herbal medicine, complete with a chance to
view a rare sixteenth-century medical compendium, the oldest medical book in New Zealand.
Past events have included a Celtic pilgrimage to Quarantine Island, a Christmas Revel/dance
party, and a puppet play of Christopher Marlowe’s Dr Faustus. The Society strongly believes
in engaging with other community groups, and we have formed good creative partnerships
with the musicians of Panache, dancers from Les Belles Vilaines, Jack Frost Morris, and
the Ceilidh Club, and the puppeteers of the Dunedin Rudolf Steiner School. The Society
welcomes participants of all ages and interests, whether you are keen to wield a rapier, or
prefer to dance an elegant pavane, or just want to sit back and take in the period atmosphere.

The Future
Upcoming events include a community radio presentation on alchemy, due to air on Toroa
Radio in September and a Christmas Feast and Playford Ball in December.
If you would like to join in one or more of our activities, if you want to be kept informed
of our events, or if you belong to another group which would like to do something in
partnership with the Dunedin Medieval and Renaissance Society, please contact Jonathan
on 453 1947 or email ignatius@dunedinblog.co.nz. Though we have our reservations about
the modern world (especially computers, which are clearly demonic), we reluctantly concede
that technology has its uses! You can check out some of the Society’s recent events by visiting
our blog at medieval.dunedinblog.co.nz, or just google “medieval Dunedin.”
Posted by Alistair Mackay at 7/09/2010 10:26:00 PM No comments: 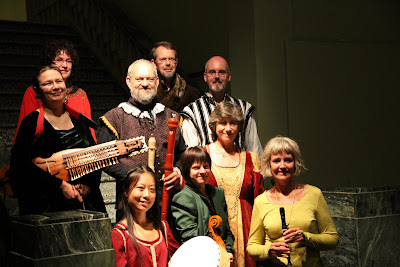