Images of the Ball with Baron Emrys 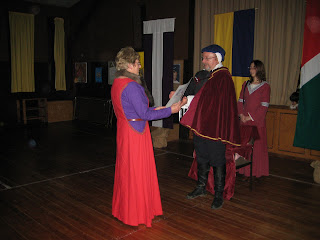 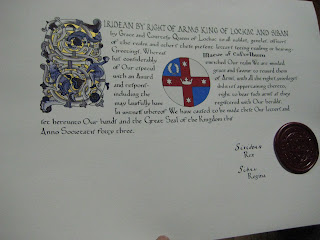 To complement Lady Fridda's most excellent entry, here are a few images of the ball - and a short vid of us dancing.
The photos are of Lady Maeve receiving her Award of Arms from Baron Emrys, and of her beautiful award certificate. The video was made by Constance on my camera and is of the 'Knowne Worlde Parvane' . Sorry about the poor lighting.
YIS
Wynflaed

A quartet of early music enthusiasts played on drum, pipes, recorder, viol and spinet at the Castelburn Bal last evening. The company danced with enthusiasm and a measure of gusto and there was a tasty supper to follow by candlelight and the colourful Castelburn banners.

Our trusty supervisor of the kitchen received from the hand of the newly invested Baron of Ildhafn her award of arms entitling her to add the title “ Lady” before her name in recognition of the goodlie service given to the Canton, the Barony and thus, The Kingdom. The populace much admired the splendid calligraphy on the Award granted by Their Majesties. An award richly deserved by the now Lady Maeve, a treasure among cooks. Huzzah !

We were honoured to be among the first to attend Court held by His Excellency The Honourable Don Emrys Tudor.

Domenico fights heavy with the Baron

From the Baron and Baroness

Bartholomew and katherine to the good people of Southron Gaard,
Castelburn and St Kessog, greetings,

We have just returned from St Kessog's Fimbulwinter III encampment
and, true to its predecessors, it was a weekend of balmy spring
weather, relaxation, new faces and much learning in the martial and
arts areas.

We congratulate the stewarding and cooking team for looking after
everyone so well; it was the kind of event where everyone pitches in
to help which is enjoyable in and of itself, but the behind-the-
scenes work is always very significant.

It was our pleasure in Court to award a Tour d'Or to Lady Eyd?s of St
Kessog and Ignatius of Castelburn. Each is the Seneschal of their
group and both have made great efforts to lead and inspire their
populace, to their benefit and that of the Barony as a whole.

Finally, the super-boffer championship was held as always, and won
this year by Domenico of St Kessog against stern competition from
highlanders and lowlanders alike.

This weekend just passed was Fimbulwinter - the winter encampment of the college of St Kessog (the Otago Uni branch of SCA). The Fimbulwinter is the name for a winter which is the 'worst in living memory' when Loki, the god of mischief, supposedly escapes from restraint and sails across the sea in a boat made from dead men's fingernails to wreak havoc on the land. I'm sure I have this completely wrong, btw, and am more than happy to stand corrected. Thankfully, Fimbulwinter has never lived up to its name and the weather was, again, gorgeous.
We were at Berwick Camp, which is about 30-40 mins south of Dunedin. Despite being relatively close, it feels nicely isolated, and is secluded and quiet - other than birds and cicadas, of course. It is set in a little valley, which made for great acoustics as the clash of our shields resounded against the hills....

Friday night was fairly casual as folks drifted in, nested, then settled around the fire to chat and play games. Medieval/Renaissance charades was popular, with the added categories of people, buildings and painting.

The organised programme kicked off on Saturday, with sessions on rapier and archery.

Lessons continued into the afternoon. There was also a session on SCA 10, some dancing, and lots of feast prep.

The Italian themed feast was delicious. First course was chicken and pomegranate sauce, biscotti, bread and salad. Second course was beef cooked in wine, broccoli, carrot, mushrooms, rice, and the fabulous 'lozenge' (sp?) - otherwise known as 'Roman macaroni', made with lasagne pasta but with a cheese and sugar filling. I'm sure I've made it sound disgusting, but trust me, it is fatally delicious. Desert was pears in wine, with squares of flaky pastry (think baklava but with cinnamon sugar instead of honey), and 'snow' which was cream with rose water and sugar.

During the feast, the Baron and Baroness held court. They awarded a Tour d'Or to Ignatius and Lady Eydis, and a bardic prize to Mielikko.

The main event of Sunday was the 'superboffer tournament' - a chance to thump each other with relative abandon. I had to prepare lunch but took the chance to dress up fierce and beat up the Baroness and Baron's lovely daughter. After many bouts, Domenico was declared the victor.

After further repast - mostly deja vu food - all the superheroes turned back into their normal selves and dispersed back from whence they had come...